What Do You See When I Say Abuse? 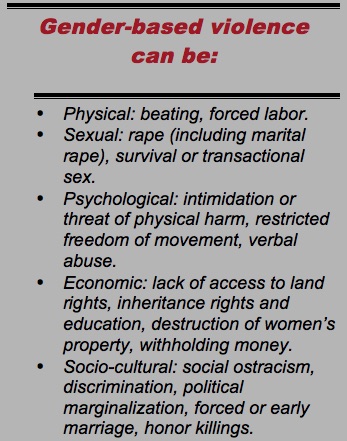 Swollen, black eyes, cut lips, skin burns, cringing women (and sometimes men). If you do an image search on the internet using “domestic violence,” these are the photos that will pop up on your screen. They’re also the mental images we conjure when we hear the words.

But violence isn’t only battery. The sad array of types of domestic (or the now-preferred “intimate-partner”) abuse includes psychological, economic, and sociocultural abuse, or even the threat of these. It includes exclusion and intimidation based on gender (often perpetrated by teachers and coaches). It includes the more powerful person’s withholding food and money from partners and family members who are in a one-down position.

Because Picture Alternatives’ work is all about visual communications, we think about ways to convey what interpersonal violence looks like and its effects on individuals and societies. So when people say “violence against women,” for instance, we want to see the big picture of abuse, not just the close-up of black-and-blues.

One path into the complex picture of domestic violence was paved in 1993 when the United Nations adopted a declaration on gender-based violence. The declaration defines violence carefully and comprehensively.

Gender-based violence, asserts the UN declaration, is a means of control and oppression that can include emotional, social, or economic force, coercion or pressure, as well as physical harm. It can be obvious. But it can also be covert, taking the form of intimidation, threats, persecution, deception, or other forms of psychological or social pressure.

One of the most devastating, but often hidden, forms of violence is economic. All over the world we see instances where a woman’s access to resources is denied or controlled. Time, money, transportation, shelter, insurance, food, clothing—these crucial pillars of a healthy and productive life are crushed. It happens when there is a stark imbalance of power. A tank against a tricycle. The playing field is not equal when one person controls the goods and uses that power to bludgeon the other into submission, conformity, and passivity. The imbalance breeds a dangerous dependence of the weaker on the stronger. The person with material power commits acts of economic violence by, for instance, withholding money or financial information, refusing to pay bills or maintenance for a woman or the children, or destroying jointly owned assets.

This dynamic of course happens privately in couples and families. But it’s public, too, and pervasive in cultures where women (or LGBT people) are deemed fundamentally inferior to men. The results taint every aspect of life. Physical and mental depletion, sickness, depression, helplessness, defeat, confusion, despair. That’s the personal level. And at the public level? People who don’t have control of their lives are deprived of choices like education and livelihood and of active participation as citizens.

When we talk about interpersonal violence, we need to determine if our words and images alienate or resonate, obscure or illuminate.

The sooner we expand our awareness of abuse, the social structures that support it, and its many manifestations, the sooner we can move toward remedies. You have to see the disease before you can recommend the cure.

Go to the National Domestic Violence Hotline’s excellent, clear guide to spotting the warning signs of abuse—abuse of every kind, as I’ve been describing. Here is the link. http://www.thehotline.org/is-this-abuse/abuse-defined/ Know the red flags. Know that abuse is more than battery.

This site uses Akismet to reduce spam. Learn how your comment data is processed.

Our Winter 2016 Newsletter
by Picture Alternatives on January 25, 2017